This Komet cabinet is designed specifically to handle time-based guitar effects. Komet describes the Ambikab as providing “a unique solution to the age old problem of applying ambient, time-based effects to an amplifier’s sound without degrading the original sound in any way.”  According to a source close to the rig, this change was made as part of Trey’s tireless quest to find a cleaner rhythm sound. Per this source, Trey’s original Ambikab was a NAMM show prototype. The cabinet has two 12″ speakers (Celestial G12-65 Heritage currently) that are fed a dry signal directly from the Komet amp head. It also has two 10″ speakers that handle the “wet” signal (these may previously have been 8″). The 10″ speakers are the stock G-10 Vintage 60’s.  The dry signal is sent out to delay and reverb effects and then returns to the Ambikab which re-amps it as a wet signal to the 10″ speakers. So there are two 12″ dry speakers and two 10″ wet speakers, allowing the time-based effects to be present without muddying the dry tone.  See Komet’s hookup diagram below: 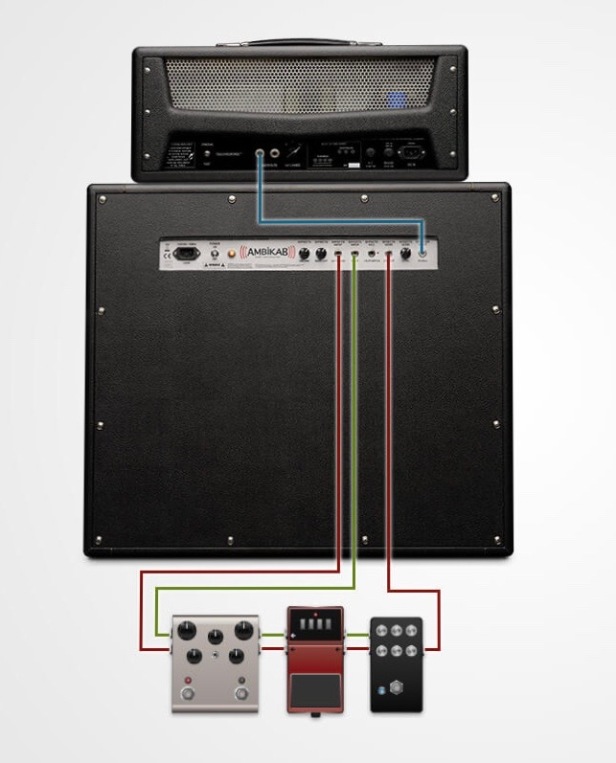 Currently, the effects loops in Trey’s ambikabs are loaded with custom delay/reverb pedals made by Robert Keeley and housed in the Keeley Eccos box.  For NYE 2019-20, the Custom Eccos was in an Ambikab loop connected to a dedicated amplifier with no effects in the front end (front end effects went to a second amplifier).  Accordingly, there was not a single effect — no interruption — between the guitar pickup and the first preamp tube (V1) of the SGA amplifier.  That scenario is the tone-chaser’s dream, as that interaction between the guitar pickup and V1 is where the real magic happens.

In September 2020, Komet released a “wet only” version of this cabinet called the Ambikab Jr., pictured below in the TGR test lab with some effects from Robert Keeley.