Another key driver of Trey’s sound has been the vintage Ross Compressor.  For years, this was considered by many would-be Trey-impersonators to be the key to unlocking his sound.  I was among those who was sure that I needed one to sound like Trey.  Turns out it also requires 10,000 hours of practice.

In general, a compressor is designed to even out the volume of an instrument across various input levels.  So it boosts quieter signals and squashes louder ones to keep the sound within a given range.  The Ross Compressor was not considered especially desirable before it became known that Trey used one.  Now Reverb.com describes it as the Holy Grail of compressor pedals, and they fetch upwards of $500 (or more) used.  Not to worry, though, there is a cottage industry of small builders making excellent clones of the Ross, which come in closer to the $200 range.

The Ross Compressor was famously absent from Trey’s rig during 2.0, and fans who longed for the 90s Trey sound actually got together (under the name People for a Compressed Trey) and bought him another, as documented by this article in Glide.  Here’s a picture of me with that gifted compressor at Hampton in 2018: 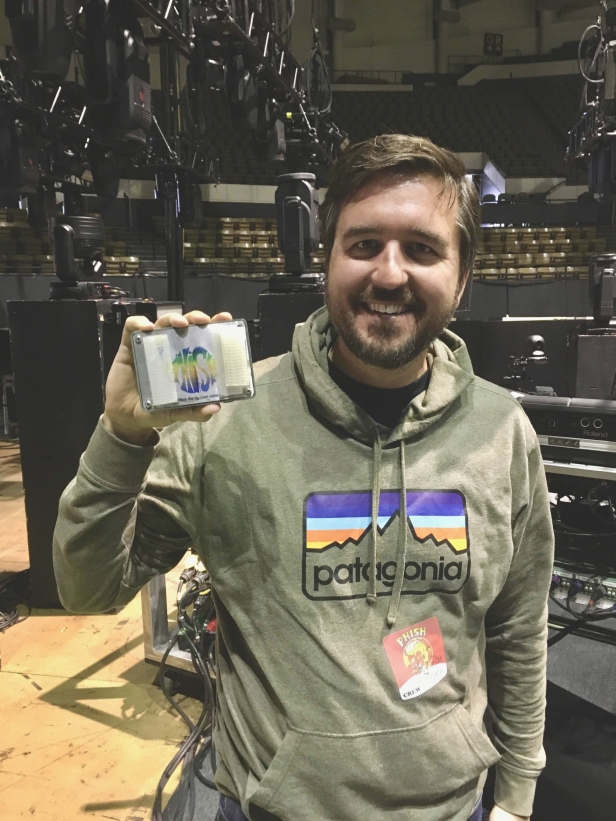 Recently, Analogman has said that “in mid 2016 [Trey’s] old ROSS comp was finally on it’s last legs so he tried our new REV5 small compROSSor with MIX and ATTACK knobs” and, according to Analgonman, “He liked it more than the Ross, and got two more for backups.”

Trey started 2017 Summer tour with the Ross Compressor in line, but dropped it after a few shows (the Victoria Reverberato took the its place in the CAE switcher).   During the Baker’s Dozen shows at Madison Square Garden, a source close to the rig (citing a conversation with Trey) said that the Ross was necessary during the Mesa Boogie Mark III era but is less so with the Komet Trainwrecks.  The reason has to do with the natural compression delivered by power tubes that are turned up and working hard.

While the Boogie’s pre-amp tubes were cranked (Volume set to 10), the power tubes were staying relatively cool (Master Volume set to 3).  That’s because the Boogie has so much power/headroom that higher Master Volume settings would be ear-splitting on stage.  In that scenario, the Ross was necessary to compensate for the absence of natural power tube compression and provide the “eternal sustain” sound Trey uses for songs like Divided Sky and YEM.  On the lower-wattage Komet, there is only a single Volume knob (no Master) and it controls the power tube output.  Because the amp has lower overall power than the Boogie, that Volume knob is set higher, so the Komet power tubes are really cooking.  Under those conditions, the power tubes deliver compression and sustain naturally, and once Trey got comfortable that the Komet was doing doing this, he removed the Ross.  It has been in and oust since then.

New rig rundown is online at the website. Link is in bio. Fresh pics and explainers. Enjoy and happy New Year!
Major rig overhaul from @customaudioelectronics — see my write up at www.treysguitarrig.com
Here the new guitar rig @treyanastasio will be using as of tonight’s show. Note: 1 @officialibanezguitars Tube Screamer Instead of 2; the envelope filter is back; and both @kometamps heads are being used, one for 6L6 Fender-style tones and one for EL-34 Marshall-style tones. More, as always, at the site (link in profile).
Some fresh shots of @treyanastasio guitar rig from this week's symphony run are now up at the site: TreysGuitarRig.com.
Facebook designer confirms that company's guitar icon is based on a Languedoc Guitar.
Here's the @korgofficial Kaoss Pad in place (center-top) on @treyanastasio 's guitar rig. This addition is the only change from the Baker's Dozen. Trey creates ambient loops on the Boomerang, then samples them to the Kaoss Pad, which he uses to tweak them during the set. The Kaoss Pad runs direct to the PA, not to the guitar speakers. You can hear it here: https://twitter.com/TreysGuitarRig/status/903839086724644864 #phish #phishdicks