Note on Amplification: at the LOCKN festival, the Boogie was not visible at all.  It is possible that it was obscured behind a speaker or behind the entire rig.  But in the picture below and other pictures I’ve reviewed from Summer 2016, it is not clear to me that a 1/4″ input cable is plugged in to the Mark III.  As a result, I’m starting to think the Mesa Boogie Mark III was backup throughout Summer 2016, and the Deluxe Reverb has been the primary amplifier, running a speaker line out to the 2×12 cabs just like Trey used to to with the Bruno cabs (see here for more on the Deluxe Reverb/Bruno Cab combination).

A good shot from Wrigley of the (unmic’d) Deluxe Reverb.  Also see the Mark III standing on its side next to the 2×12 cabs and the ’96 Koa.  Behind them is the Leslie G-37.  Note the pickup covers remain off of the ’96 Koa.  Still double-space single coil? 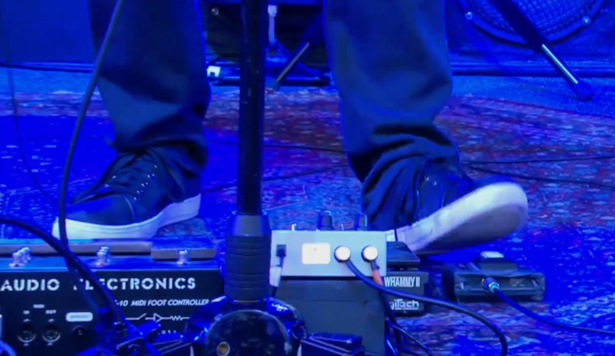 Another Wrigley shot, this time of Trey working the “Once” pedal during Heavy Things.  In his gear description video, Trey says this pedal was specifically designed for this song.  Inside of the Once pedal, you can see the Whammy II, the Beigel Tru-Tron, and the CAE switcher on the far left.

Still at Wrigley, here’s Trey working the Wah during Moma.  The Boomerang is visible on our left.  No sign of the Ross Compressor.

Here’s one from SPAC (7-1-16) with a good angle on the “Crybaby” logo while Trey works the wah.  It has long been rumored that inside the Crybaby shell is a Teese RMC-3.  This shot also gives us a clear look at the “Mike Beigel” signature on the side of the Tru-Tron.  Again the Ross Compressor is absent. The Ernie Ball volume pedal is in the background of this shot, out of focus. In this shot from 7/23/16 at Chula Vista, Trey is working the wah during “46 Days.”  Finally, we get a clear shot of the Ross Compressor just beyond Trey’s Wah-foot.  On our side of that foot we get another decent look at the Whammy II and the Beigel Tru-Tron.  You can also clearly see the black tape over the Boomerang logo in this light.  Here, the Ernie Ball is in the the expression pedal closest to us..

A nice shot of the rack.  Clearly an Analogman “sunface” logo on the inside TS-9.  To the right of the Tubescreamers is the H&K and behind them is the Supa Puss.  The Supa-Puss is being supported by the Alesis Microverb I, which is sitting underneath it.

A close-up from Noblesville (6-26-16) gives us a nice overhead view of the rack effects.  The Supa-Puss is sitting on a block of some kind on top of the Microverb.  Above and to the left of the rack you can see the unmic’d Deluxe Reverb.  Trey is playing Blonde No. 2 guitar, and behind him are the ’96 Koa and Ocelot.  It appears as if there is another Blackface Fender amplifier (likely another Deluxe Reverb) behind those guitars.